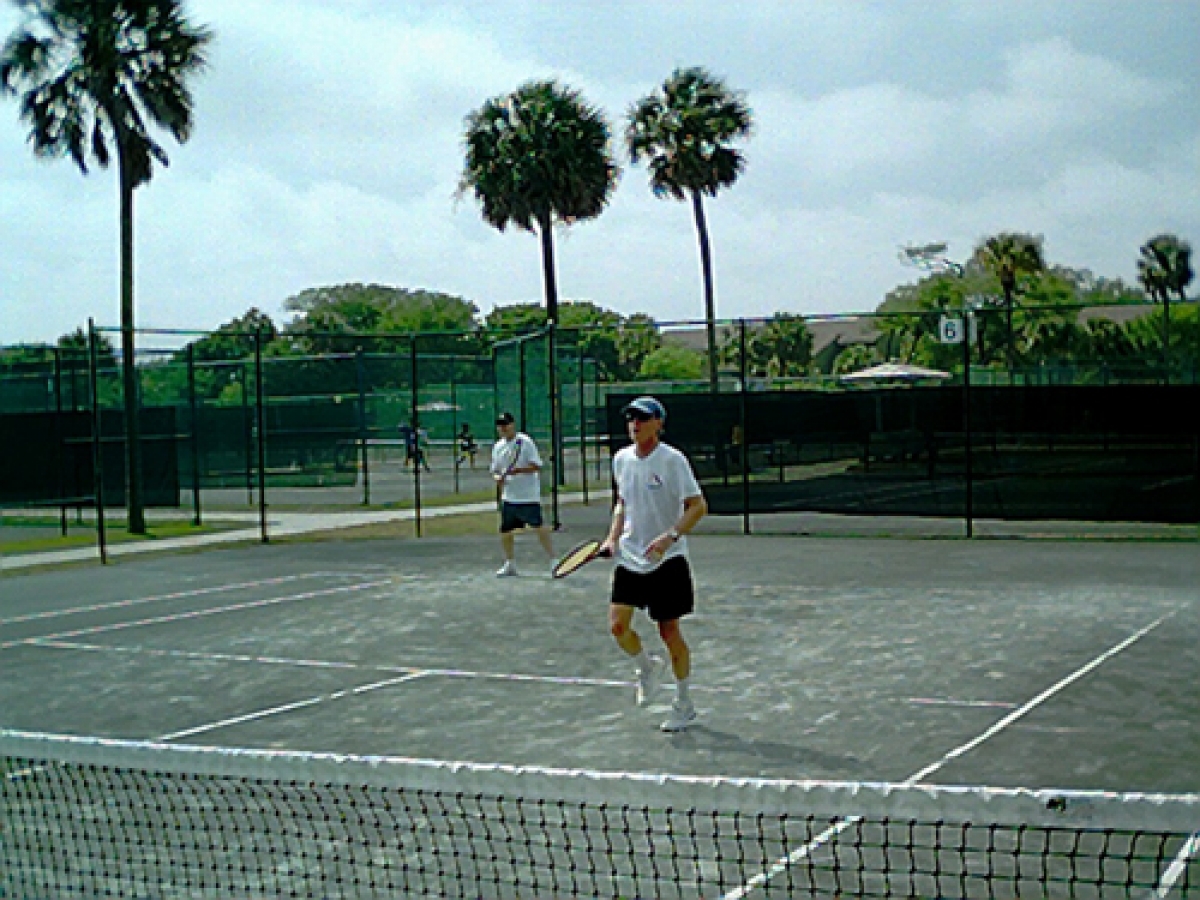 My usual tennis group, led by Paul Anderson, played three long sets of tennis yesterday evening in a steady, cold rain. We have done this type of thing before. Many times over the years, we have played in still falling (or already fallen and piled high) snow, sleet, rain, high wind, fog, bitter cold, whatever. But it is still instructive, nonetheless, to do it again. From season to season, I forget what it was like to do some difficult activity the year before. Maybe our mind erases the bad memories of prior painful events? It is good to be reminded of things, to practice again and to pay one's dues.

There were several times yesterday when I wanted to get out of the bad conditions, and just about threw in the towel. The other guys were making suggestive comments about how they had enjoyed about as much as they could stand. But no one wanted to be the wussy and quit first, so we all slugged it out to the end.

The first problem is simply staying warm enough. Sure, we could put on a rain suit. But then we would get too hot and wet from sweat. The real trick is to get in stasis: a state of balance, where the body heat produced matches the heat lost to conduction from the rain and to convection from the cold air. It took me two full sets to do so. For the first hour and a half, I was constantly pulling up and down zippers, adding and removing hats and gloves and feeling out of sorts. My clothes were all synthetic and thick, but not water proof. There was a lot of moisture management, evaporation and heat transfer going on.

Then, at the start of the third set, I had a noticeable and comforting feeling of correct warmth matched with ventilation. It was surprising how distinctly it came on. It just felt good!

The next problem is actually playing tennis in the rain. The balls become very heavy and have to be hit quite hard. Most of our practiced strokes and muscle memory are for dry courts and balls, so we have to re-learn how we did it in the rain the last time, maybe 3 months ago. Plus, the puddles do not produce normal bounces. Depending on the angle and speed with which the ball hits the ground, it may skip and stay fast; or it may bog and slow down. So, we must spend more effort to change strokes, burn more energy sliding around in wet tennis shoes and endure more frustration with soggy shots into the net.

Then, the next trick after thermodynamic stasis, is to reach athletic symbiosis: a state of balance between two organisms. In this case, our older-than-middle-aged bodies have to remember how to play tennis among inch-deep puddles. After an hour or so of playing in the wet, we start getting the hang of it again. We whale the water logged balls with mighty, self-satisfying swings that make the shot land correctly in the far corner of the court. We hit some super-heavy top spin serves. We learn, perversely, to aim for the puddles, typically followed by outraged protests from our opponents about unfair play.

Sure, it is not proper tennis. But it is a sport and everyone else on the court is suffering from the same disadvantages. So things are fair. And eventually, things are actually athletic and really fun! I guess the point of playing in such adverse conditions is the camaraderie ' it can get quite hilarious. And the exercise. And the character that develops from getting used to bad circumstances and not quitting.

One time I signed up for some paddling instruction at the Nantahala Outdoor Center. I had to take a short written test of my canoeing skills to see in which level class I belonged: beginner, intermediate or advanced. Based on my lifetime of experiences, including a lot of white water trips and several week-long expeditions, I smugly expected to be rubbing elbows with the other advanced students. The final question was, how many times in the last year have you been paddling? Due to my schedule packed with other sports ' hiking, biking, fishing, you name it and I do it - I answered ''about three.'

When the instructor reviewed my answers, I was shocked to hear myself classified as a beginner. Their guideline is this: unless you have been on the water at least five times in the last year, then you are out of practice for canoeing and out of shape for paddling. You are not in sync with the rivers and lakes. You are not in stasis with your muscle memory. You are not in symbiosis with the living, breathing water. You have forgotten too much. You are back to being a beginner.

So, it is good to pay our dues. It is good to persevere, even when the game does not seem like much fun. It is better to be a finisher that a quitter ' even if it is just tennis in the rain. And it is always better to be outdoors, no matter what.

Bob is the site curator and writer of Blue Ridge Outing. Since starting the Blue Ridge Outing travel blog in 2002, Bob has written, recorded and documented countless expeditions in the US and around the world.

More in this category: « Snow Physiological Thermodynamics Brunton 8099 Eclipse Compass »
back to top