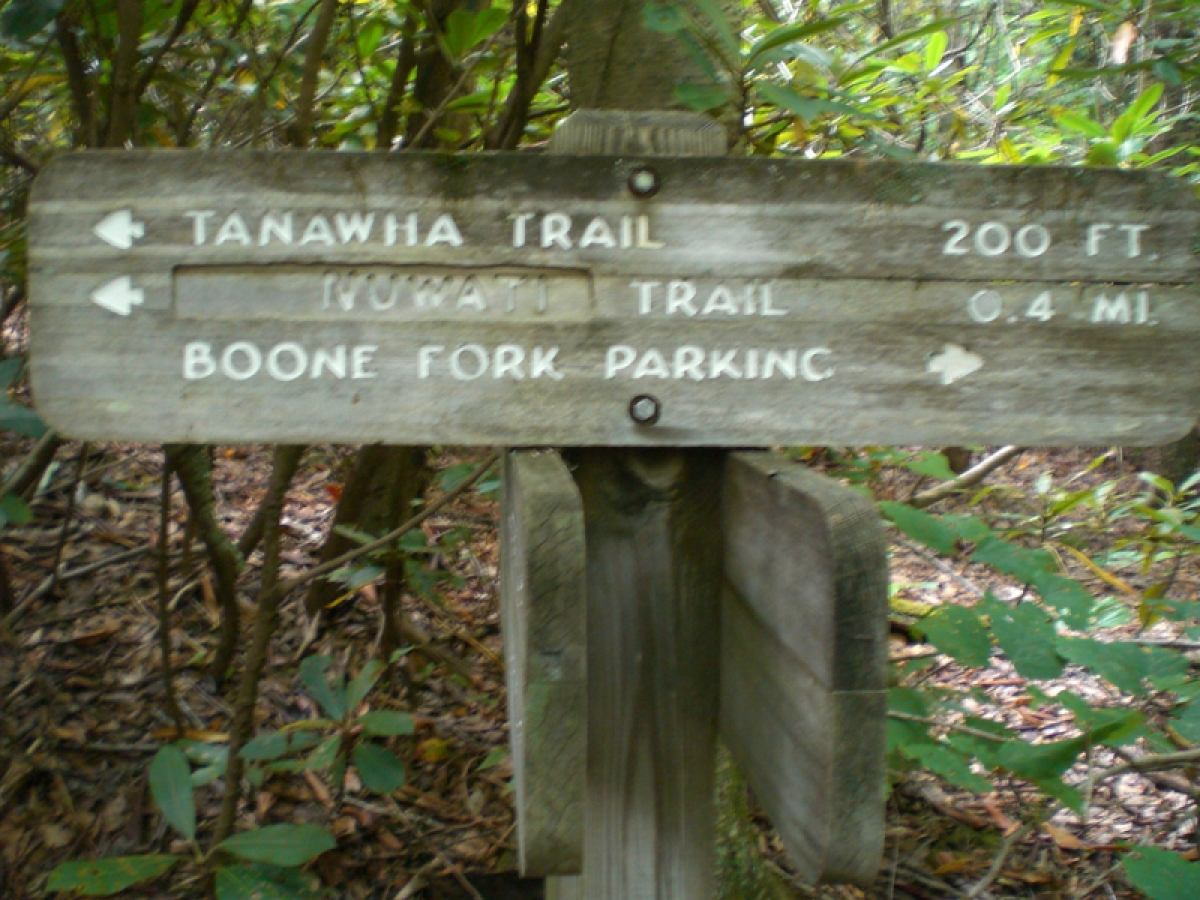 Two teen age boys from Charlotte, who I met on the mountain, leap frogged up the Cragway Trail with me. I would pass them and they would pass me. I was hiking as strongly and steadily as I could. They would stop every 100 yards and climb the rocks. Yet, despite their large extra expenditure of energy, they were keeping up with me! That proves the strength of youth. Wonderfully, they were also polite -continually referring to me as 'sir' - and they had boundless enthusiasm for the magnificent scenery and sunny weather. I called them billy goats. They liked the appellation.

Over Friday afternoon through Sunday afternoon of Labor Day weekend, 2014, I backpacked up and down Grandfather Mountain. All my outdoor buddies had conflicts, so I went solo - to quote Forest Gump - again! Later in the trip, I met two nice, middle aged men from Gaston County at one of the few springs filtering water. They had the kind of gear that I used to carry for decades: old fashioned, out of production, worn, inefficient and heavy. One of the men was a Boy Scout troop scout master. The other guy asked if I was travelling solo? I said 'yes,' and he said that he would never do that! He would be afraid to be out in the woods alone. I said it was fine and I was used to it. I did not add that I was packing heat - a Glock .40 caliber 13 round clip semi-auto pistol.

My route took me from the Boone Fork parking lot on the Blue Ridge Parkway, south on the Tanawha Trail, west on the Nuwati Trail, to the Streamside camp site Friday night. Then Saturday I went south (and steeply uphill) on the Cragway Trail, west on the Daniel Boone Scout Trail, to the Daniel Boone camp site Saturday night. Sunday morning my route was east on the Boone Scout Trail to the Tanawha Trail and back north to the Blue Ridge Parkway.

Being Labor Day weekend, a popular time for outdoor trips, I expected the campsites to be all taken before I arrived. Fortunately, I barely beat the crowd. When I self-registered early Friday afternoon at the State Park kiosk on the Tanawha Trail, the clipboard showed that only one of the approximately 15 campsites was taken. I easily reserved the two sites I wanted. But when I came out Sunday morning, back at the same kiosk, I found that all 15 sites were reserved. Even the two sites I had just used were already taken for the next day. Close call.

The only wild life that I saw was a few song birds. The normal array of critters - grouse, squirrel and ravens - was not visible.

The weather was like in the movie Camelot. It rained hard both nights and was sunny clear all three days. Is this a great country, or what?

I have also found that, as I get older, I am becoming more dependent on my sleep apnea CPAP machine and my flat, soft bed. I have been backpacking without my CPAP machine dozens of times, mostly with no ill effects, for a decade. I have been sleeping in a tent on a simple foam pad for many more decades. Uncomfortably on this trip, I had the worst experience trying to sleep of my outdoor life. Besides lacking my machine and big bed, one of the tent sites was unavoidably on a spot with a convex hump in the middle (like an upside down hammock) and sloping sharply downhill. I spent the entire night tossing and turning, trying to get comfortable. Whenever I woke up, I had actual pains in the muscles of my neck, shoulders, back and hips. It felt like I had fallen down a stairs and was bruised all over. I will have to be more careful in the future to find flat, soft, level tent sites.

I had a great time playing Ranger Bob. Numerous groups of hikers and backpackers stopped me to ask trail directions and hiking advice. Even the State Park Ranger that I met asked me some detailed questions about the trail conditions that she did not know. For some odd reason, I have found that when outdoors, more men than women, particularly those with families are pig headed. They are prone to ignore other hikers on the trail, will not ask for advice and even refuse to consider advice from someone who knows more than they do. They like to order their family around like little soldiers. I am embarrassed to say that I used to be like that, but I have hopefully outgrown the worst of those traits. The wives and kids are more friendly and open minded. Oh, well, it takes all kinds to make up the world. I had a good time.

Bob is the site curator and writer of Blue Ridge Outing. Since starting the Blue Ridge Outing travel blog in 2002, Bob has written, recorded and documented countless expeditions in the US and around the world.

More in this category: « Cozumel Scuba Diving Linville Gorge with Buddies »
back to top